So I had an A500 Plus lying around for quite some years. And I thought it would be nice if this machine would boot! It hadn't since I bought it. And indeed it didn't boot now either.

An A500 Plus has a battery which I removed immediately after I bought this computer. But the damage was already done. I now had the guts to inspect this further and I noticed that the pins of Gary (a controller chip) were badly corroded. After a good clean there was still no boot, no display, nothing. But when I pushed hard on Gary, there would be some display, mostly green, white or yellow. As some of you might know, this gives an indication of the problem. I decided to remove the socket of Gary although I'm not very skilled at (de)soldering. And it was not very easy. Using a desoldering pump and desoldering wick I managed to get it of, but it cost me hours. You see the result in the picture.

Then I tried to hunt for broken traces, which also is very time consuming. Using a magnifying glass and a schematic I only found one damaged trace. I ordered a new socket and we will see in the next part if I manage to get this chip and the computer working again. Or that I have to hunt for more faults on the motherboard. 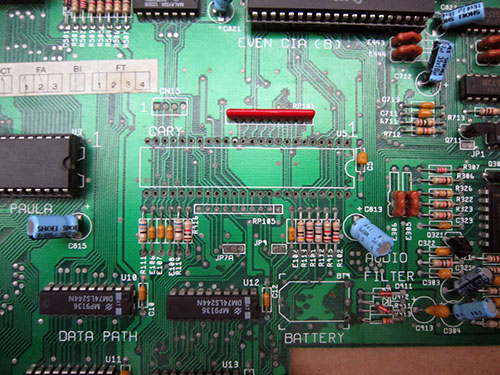